Click on a logo to review our charter certificate. 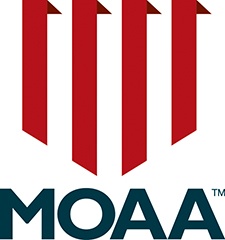 Those pioneer leaders guided the chapter into the future and laid the foundation for the active organization the Arizona Chapter has become today.  Early members included:

Chapter meetings in the 1950s into the 1980s were held in a variety of Phoenix-area locations, some no longer in existence. Meeting sites included the Williams Air Force Base Officers Club, Beefeaters Restaurant and Alpine Village Restaurant,

A 40th anniversary celebration was held at the Luke Air Force Base Officers Club in 1996 with 130 in attendance. Col. Marvin Harris, TROA Public Relations Officer, was featured speaker, and Arizona Congressman John Shadegg and his wife Shirley were guests. A special commemoration was conducted to honor charter members.

In 2006 the chapter’s golden anniversary was celebrated at the Scottsdale Plaza Resort with Vice Admiral Norb Ryan, MOAA President, as featured speaker. ?Medal of Honor winner Major (then CWO) Fred Ferguson and his wife were guests, and total attendance was 146.

Arizona Chapter Activities and Honors Through the Years

The Arizona Chapter has grown from those original 70 members to over 200 at the start of 2011. With the transition from TROA to the Military Officers Association of America, a MOAA charter was issued to the chapter in 2003.

Over the years the chapter developed programs to promote community and military service. Foremost among these is the ROTC Scholarship?Program. Initially providing scholarship awards to 62 outstanding college-bound JROTC students between 2001 and 2015, in 2016 our scholarship program shifted to providing scholarship awards to highly deserving Arizona State University (ASU) ROTC cadets completing their Junior year. Scholarships are awarded each spring at a chapter meeting. The chapter maintains a special scholarship fund to support the program, with donations from chapter members, community businesses, and an annual golf tournament for members and guests.

A companion to the Scholarship Program is the JROTC Medal Program. Chapter members present Achievement Medals annually to JROTC cadets in the next to last year of studies who have shown outstanding qualities, including exceptional potential for military leadership.  Each recipients is selected by the cadet’s JROTC instructor. Presentations take place at a special ceremony at each of the 15 high schools our chapter supports.

Each year, the chapter provides an Honor Guard as part of the annual Memorial Day commemorative service at the Veterans National Memorial Cemetery in North Phoenix. Members also promote the support of such community programs as the Marine Corps Reserve Toys for Tots program, Arizona National Guard Family Assistance Program and Employer Support for the Guard and Reserve.

Also begun in 2001 was the chapter’s Meritorious Service Award Program for members and spouses who exhibit outstanding service above and beyond that normally expected. Many of our members have earned MSAs for their volunteer efforts since the program began, many receiving subsequent awards.

The Arizona Chapter is proud of its long history of service to members, veterans and the community and is dedicated to building on that tradition every year.

For more chronology and photographic history of our chapter, please visit the other pages listed under this title in the heading bar.