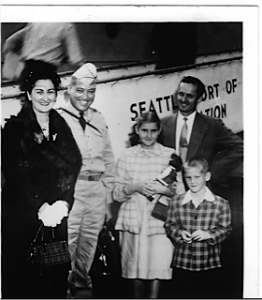 Farmer family seeing Jim off to Japan, circa 1950

Little is known about Colonel Farmer’s Army career, other than the following:

Colonel Farmer was our 5th Chapter President, serving in 1960.  After his retirement from the Army in the mid-50s, James went to work for the Motorola Government Electronics Group in Phoenix as a marketing executive.  In addition to his membership in our chapter, he founded the Industrial Representatives Association, was a member of the Valley Presbyterian Church, the Masonic Lodge, the Sojourners, and the Elks 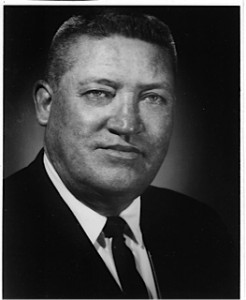 Jim Farmer circa 1960 working for Motorola.

Colonel Farmer died on 11 August 1982 in the Good Samaritan Medical Center, Phoenix, Arizona.  James was survived by his wife, Geraldine M., who was born during 1915 in Philadelphia, Pennsylvania; his daughter, Marian Theresa Miller; his son, Captain Thomas W. Miller; plus 4 sisters and a grandson.  His wife, Geraldine, passed away on 31 January 1994 in Mesa, Arizona, survived by her two children and 4 grandchildren. Her services were conducted at the Valley Presbyterian Church, 6947 E. McDonald Dr., Paradise Valley. Arrangements for Geraldine were by Green Acres Mortuary, 401 N. Hayden Road, Scottsdale, Arizona.