Colonel Elmer F. Arnbrecht, United States Army, retired, was born on 29 Jan 1902 in Okeene, Oklahoma, the son of Jacob Arnbrecht and Theresa (Rosa) Irion.  Elmer joined the military in the 1920s, and was a veteran of both World War II and the Korean War.

Some of Colonel Arnbrecht’s assignments included:

Colonel Ambrecht?s awards and decorations include: 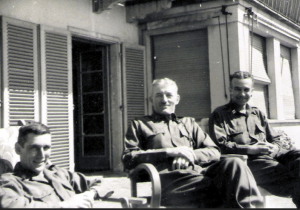 Colonel Arnbrecht was our 10th Chapter President, serving in 1964.

Colonel Arnbrecht passed away on 11 Jun 1997.  He was survived by his wife, Anna Ruth Jefferson Arnbrecht.  After a memorial service at Fort Huachuca, Sierra Vista, Arizona, he was interned in the post cemetery, Section 7, Site 47b.