Commander Ira David Easley, United States Navy, retired, was born on 3 February 1908 in South Carolina.? David was the son of Lizzie and David H. Easley, both of South Carolina. 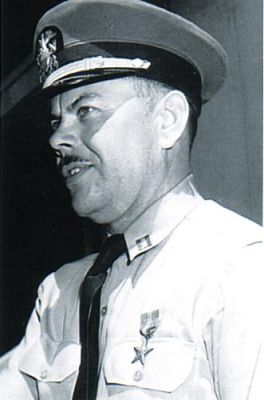 CDR, then Lieutenant, Easley receiving the Bronze Star in 1944

Commander Easley enlisted in the United States Navy on 14 November 1924 and retired on 28 February 1955.  Some of his assignments and locations during his service include:

Commander Easley awards and decorations include:

CDR Easley was the Captain of LST-388 during the Normandy Beach Invasion in June 1944. His ship is show here discharging equiptment on Normandy Beach.

Commander Easley was our 11th Chapter President, serving in 1965.  David passed away on 2 May 1975 in Riverside, California.  He was predeceased by his wife, Murielle, who died on 30 Nov 1974 in Riverside.  David had remarried on 23 April 1975, was survived by his wife, Laura Kathryn Harris Richmond Easley.  Laura passed away on 22 Aug 1990 and is interned in Site 2087, Section 28, Riverside National Cemetery.  It is unknown where Commander Easley is buried.