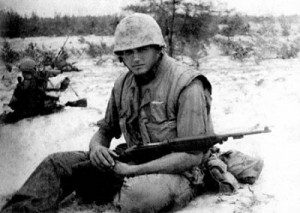 The following obituary appeared in The Daily Courier, 3 Apr 2010.  I won’t presume to think I could do a better job writing Captain Simmons’ biography. Jim was our 22nd Chapter President, serving in 1976.

“Some people spend an entire lifetime wondering if they made a difference in the world. But the Marines don’t have that problem.”
-Ronald Reagan

He is survived by his incredible and loving wife of 46 years, Jan. Jan and Jim were truly blessed to have two terrific sons, Judd and Bret, who in turn married great women, Carrie and Gretchen. The couples produced four wonderful grandsons, Nate and Zane of Prescott and Toby and Quentin of Bellingham, Wash.  Jim is also survived by his mother of Scottsdale, Ariz., his kid sister, Linda Simmons, of Hollywood, Calif., his brothers-in-law Ray Guntrum and Dan Bernstein (Karen) and their sons and a grand-nephew and niece.

Jim graduated from Syracuse University in 1963, where he first met Jan. They married on Feb., 17, 1964. Jim had joined the Marines in 1959 out of high school at age 17 with his father’s consent. He was commissioned a second lieutenant in 1963 out of college. In August 1965, Jim’s unit boarded a ship for Vietnam and Jan returned to her parent’s home in New Jersey to work, wait and worry.

As an Infantry Platoon Commander of about 50 Marines in almost constant combat, Jim achieved what he always considered the crowning statement of any contribution he may have made. This may best be summarized by President Reagan’s famous 1985 comment.  On Jan. 7, 1966, Jim was hit by machine gun fire in the belly and hip. He spent 20 months in various military hospitals, with somewhere around 30 surgeries. His young bride, Jan, lived through all of this trauma with the most resolute strength imaginable. Jim was in awe of the strength of Jan through the early trials thrust upon her as a young Marine bride and her unwavering ability to cope with everything that followed. She is truly the best thing that could have happened to Jim and he did not deserve her, but he is eternally grateful. 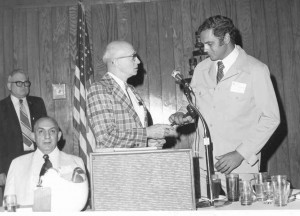 In 1967 Jim entered law school at Syracuse University. He was on the Law Review and Moot Court Board. He graduated in 1970 after two and a half years. He, Jan and Judd immediately moved to Phoenix, where Jim practiced law for eight years, at which time they moved to Prescott in 1978. Jim practiced law in Prescott for more than 31 years. Connie Evers (Alvis) worked with Jim for more than 25 years as an indispensable assistant, with the support of her husband, Randy, and their daughters, Jessica and Krista. Connie was always the daughter Jan and Jim never had, and they were honored to be Krista Evers’ godparents.

Jim wrote the above comments. His family and friends have added the following regarding his spirit and attitude toward his life.

Jim’s true passion and love outside of family and friends is our country’s freedoms and right to possess firearms. He was a staunch supporter of the 2nd Amendment of the Constitution of the United States. “The true soldier fights not because he hates what is in front of him, but because he loves what is behind him.”-G.K. Chesterton (Judd Simmons).

If you looked up the word “tough” in any dictionary, you would see a picture of Jim Simmons. A man’s man, but always a gentleman. (Mike Murphy)

Jim was a truly consummate partner and friend. He never complained of his own pains or disabilities … rather, he worried about anyone else who was having trouble coping with life’s problems. You don’t meet many people like Jim in a lifetime, but you certainly treasure the times you had together. (Bill Stinson)

Jim is my hero. A finer gentleman I have not met – good friend, attorney, a great American – an example of what I want to be and what I want my kids to be. I am a better man because Jim was part of my life. (Bill Whittington)

A greater man I have never known. It has been an honor and a privilege to be a part of his life. (Connie Evers)

While Jim was a man’s man (Marine, hunter), he was a warm and sweet guy. I have wonderful memories of Jim during my trips to Arizona and our guys’ night out. Jim’s legacy lives with his two beautiful sons and four handsome grandsons. (Dan Bernstein)

They don’t come much stronger than Jim Simmons. His wounds were devastating, bringing him to death’s door on numerous occasions those first weeks and months in the Philadelphia Naval Hospital. Yet his will to live persevered and those of us who knew him then marveled at his extraordinary strength. None of us can know completely the pain and frustration that he has experienced every day since then, but we have all been privileged to witness how he triumphed over them. His is a story of heroic dimensions, the story of a man determined to make a difference, to turn his injuries into a source of strength, and to give each of us a model by which to live. To have known him is to be truly blessed. Dear Friend, Semper Fi. (Phil Avillo)

Jim was a gentleman long before Congress ever got around to naming him one. I am so proud to have known and served with him in RVN with India Company. Our time at reunions will be treasured forever … especially the last one. He did make a difference. Thank you for being in my life, Jim. I remain Semper Fidelis. (Charlie Fink)

Jim was a friend like no other. A big man. Big in heart and in character. I’m fortunate to have known him, and I will always be thankful to be able to call him my friend. (Brent Haviland)

Jim and I were platoon commanders together in Vietnam. He proved himself a hard-nosed, savvy combat leader who truly earned the ultimate epitaph for all of us who served in the Corps: “He was a good Marine.” Decades later we reconnected, and my wife and I got to know Jim and Jan, whose devotion to one another through tough times is the stuff of legend. To have been friends with them is a blessing and an inspiration. Rest in peace, Jim. You’ve done your duty. Semper Fi. (Watt Miles)

Jim’s belief in people and caring ways served as an example to me to strive to be a better man. He was and is a Prince among men, my best friend, and the world will be a lonelier place without him. (Bob Kuerner)

As Jim’s physician and close friend, I have always had the greatest admiration for his unfaltering pride in having served his country well. He never expressed regrets or complained of the lifetime of suffering he endured from his war injuries. Jim worked, played and lived life to the fullest, always with his unique sense of humor, courage and bravery to the end. I will miss him very much. (Steve Dahn)

That Jim was tough goes without saying, and not just because he had the finest beer can collection in the territory. He had that strong inner fiber that most men crave but rarely possess. He also had a finely-honed perception into other men’s cores which made him a great lawyer and a better friend. (Lewis Goldman)

Jim was a distinguished member of the Bar, a champion of ethics and professionalism, and he was a dear friend of mine for more than 25 years. (Ray Weaver)

My big brother Jim taught me to ride a bicycle when I was five and he was 12, and this is a metaphor for other lessons he taught me throughout his entire life: to do what may seem hard or even impossible (in his case, it was surviving his Vietnam injuries); to be patient, kind and caring; to live life with joy and to the fullest. I am better because he lived. Go well, dear Jim, and we’ll see you again in a little while. (Linda Simmons)