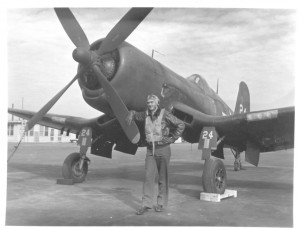 Major Billie Loos, was a Marine Fighter Pilot Ace of World War II with 7 victories.  Maj Loos is pictured with his favorite aircraft, a F-4U Corsair.

Major Loos was born and raised in Carbondale, Illinois and entered the Marine Corps from there.  He graduated May 30, 1944 in Class 36 at Jacksonville, Florida and was commissioned at Marine Station Kingsville, Texas.  He served in the Marshall Islands prior to being stationed at Yontan Airfield, Okinawa.

Major Loos shot down his first aircraft while flying out of Yontan Airfield, Okinawa.  He was flying north of the island on a dusk patrol and spotted the Tojo fighter below.  He rolled over into a dive and pulled out level with the enemy fighter and opened fire with machine guns.  The Japanese plane began smoking rolled over and splashed into the sea.  This one would be followed by 6 more for a total of 7 victories, one of the first Aces in the Pacific Theater during World War II

After 20+ years of service, including the Korean conflict, Major Loos retired.  His military awards and decorations include:

Major Loos married the former Miss Marie Martin of San Diego, California in 1957 and they had one daughter.

Major Loos had a gifted shooting eye and won many team and individual shooting honors both in and out of the Marine Corps.  He had over 50 medals on display in the home for his skill in pistol shooting.  He also had many pictures of his trophies, silver bowls, and other awards for his skill in Skeet Shooting. He often led his shooting team to victory with high individual honors.  Prizes included silver bowls, silver cups and trophies of various designs, medals, clocks and, money.

Major Loos was our 30th chapter president, serving in 1985.  Billie was a 32nd Degree Mason and active in that organization as well as his church, always willing to help his fellow man.  He became an Arizona resident in 1964 and worked in the State Health Administration and helped form the New Born Childrens Hospital.

Major Loos passed away on 24 Apr 1999. Billie was a true American Hero, no Hollywood retakes or stunt men, no high paid sports figure salary–He was a Marine.