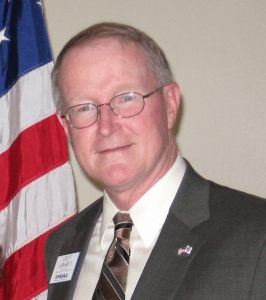 Colonel Lange was born in St. Paul, Minnesota in 1948. He graduated from the University of Southern California in 1970 and was commissioned a 2d Lt, USMCR, in May 1971, following completion of OCS.

After graduation from The Basic School in November 1971, he attended the Field Artillery Basic Course at Ft, Sill, OK and was assigned to the 1st Bn, 12th Marines in Kaneohe Bay, HI, where he served as Forward Observer, Fire Direction Officer, Liaison officer and Bn S-2. Transferred to the 3d Marine Division in October, 1974, 1st Lt Lange was assigned as the Executive Officer of Battery F, 2d Bn, 12th Marines and participated in Operation Frequent Wind, the evacuation of Vietnam.

Returning to CONUS in September 1975, 1st Lt Lange joined the 3d Bn, 11th Marines at Camp Pendleton, CA and served as CO, Battery H, 3d Bn, 11th Marines. He was promoted to Captain in December 1975. In July 1977, he was reassigned as Battalion Liaison Officer before transferring to Fort Sill, OK in March 1978 to attend the Artillery Officers Advanced Course.

During October 1978, Captain Lange was assigned as Inspector-Instructor, Battery A, 1st Bn, 14th Marines in Spokane, WA. He was promoted to Major in July 1981 and returned to Camp Pendleton, where he served as Battalion Liaison Officer and later as S-3 of 3d Bn, 11th Marines and Executive Officer of 1st Bn, 11th Marines.

Ordered to Headquarters Marine Corps in June 1987, Major Lange served as Programs Officer and later Head, Plans, Programs and Budget Section in the Manpower and Reserve Affairs Department. He was promoted to Lt Col on 1 July 1988.

Reassigned in June1990 to the 2d Marine Division, he served with the Division G-3 and deployed to Southwest Asia for Operations Desert Shield/Desert Storm. He later served as S-3 and Executive Officer, 10th Marines and was promoted to Colonel in February 1993. Ordered again to Headquarters Marine Corps in August 1993, he was assigned as Head, Manpower Plans, Programs and Policy Branch, Manpower and Reserve Affairs Department.

In March 1997, he was assigned to the 2d Marine Division as the G-3. He assumed command of Headquarters Battalion on 11 July 1997. On 8 July 1999, Colonel Lange relinquished command and was transferred to Headquarters Marine Cops where he was assigned as Deputy, Manpower Plans and Policy Division, Manpower Department. He retired on 1 July 2001 after 30 years service.

Following his retirement from the Marine Corps, Lee joined the staff of the Military Officers Association of America in Alexandria, VA. He served as Deputy Director Government Relations, working on survivor issues and later as Director, Council and Chapter Affairs.  After retiring a second time in January 2013, Lee and his wife Janet moved to Anthem, AZ. He joined the Arizona Chapter in May 2013 and served as 2d Vice President and Vice President before becoming President in May 2016. Lee has also done volunteer work with the Marine Corps Scholarship Foundation in Phoenix and is the President of the Southwest Veterans Chamber of Commerce.

He is married to the former Janet McCallon of Claremont, CA. They have two daughters, Jennifer and Heather.