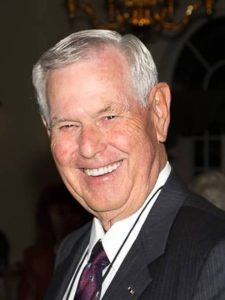 Ron Bright served 27 years in the California National Guard while pursuing a career in insurance and finance. Graduating in 1964 from Chapman University with a BA in Economics and Business Administration, he has been licensed in Life insurance, Real Estate, and as a NASD Principal in mutual fund management. Ron started his career at Woodman Accident and Life Companies in 1965 as field agent and later as Agency Manager for Northern Life. While at Pacific Standard Life Insurance, Ron was “Man of the Year” in sales management in 1978, and Principal Broker-Dealer of Pacific Standard Mutual Fund. Moved to Nor-Cal Home Loans as Vice President of Sales in1982, and relocated to Arizona in 1993. As Vice President at Career Transition Centers, counseled and placed senior managers in new careers throughout Arizona.

Ron enlisted in the Army Guard in 1965, attended Basic Training at Fort Ord, and Artillery Fire Direction Specialty training at Fort Sill. Selected for Officer Candidate School, Ron graduated in 1968 from the California Military Academy and was commissioned a 2nd Lieutenant in the California Army National Guard and the US Army Reserve. Military schools also include Basic and Advanced Field Artillery Officers courses, California Institute for Emergency Management, US Army Command and General Staff College at Fort Leavenworth, and the DOD Inspectors General course at Fort Myer.

No stranger to volunteer community service, Ron is a lifelong Kiwanis member having served three terms as Club President, and as Board Member of the Kiwanis Family House at the University of California Medical Center in Sacramento. His wife Donna is a life-long Registered Nurse and former US Navy LTJG (Nurse Corps) having served at the Balboa Naval Hospital in San Diego 1968-70. She is a past Board Member and Arrangements Committee Chair of our MOAA Chapter and two-time recipient of our Meritorious Service Medal.

Ron and Donna have been MOAA Arizona Chapter members since 2014.